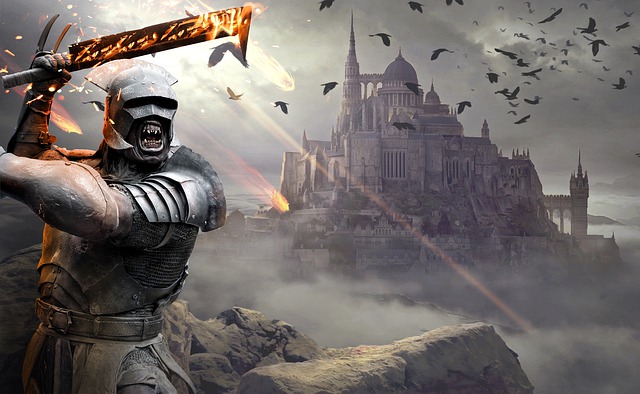 Image by Yuri_B from Pixabay

This story was written for the Reedsy contest "A Time for Action".
More specifically in the context of the prompt: "Write a story about community."

Once upon a time, there was nothing but chaos in the world. Mankind was organized in tribes that were all each other’s enemy. It was an epoch of war, and the tribe that called itself the “Sons of Lawar” had managed to raise the largest army over time. This army was commanded by Lawar XII the Conqueror, King of the Sons of Lawar, son of Lawar XI the Great.
Lawar XII won every battle he took on, bringing other tribes under his dominion, making his army even bigger, and expanding the territory over which he ruled.
“Soon I will submit the whole world to my will,” he told his people. “Our triumph cannot be stopped.”
That was before he reached the gates of Taronia, ready to start a siege.

Taronia was a city-state inhabited by the Tarons, an ancient community of people who had survived in peace for many centuries. They had developed weapons and technology with which they could easily resist Lawar the Conqueror and perhaps even defeat the Sons of Lawar altogether, but they chose not to fight. Instead of defending themselves, the Tarons sent an unarmed civilian with a simple message of peace to the King of the Sons of Lawar who stood at their gates.
Curious, Lawar the Conqueror accepted the letter that was handed to him tacitly.
"Mighty King Lawar, we are the ancient tribe of the Tarons.” he read. “We have been living in Taronia for many generations. In the early days, our people used to be belligerent, but over the centuries, we became tired of war. We chose peace as a way of life. We do not wish to fight; we just want to be left alone. Accept the life of one of our citizens in exchange for leaving us in peace."
Lawar XII didn’t quite know what to think of this message. What were the Tarons up to? Knowing that Taronia was a powerful city-state, he suspected a ruse. He aired his skepticism, telling the messenger the letter was probably meant to mislead him, but the messenger from Taronia shook his head in denial.
The man raised his voice so that the generals of the Sons of Lawar could also hear what he said: "Kill me to relieve your blood-thirst and let my fellow citizens live."
Lawar XII roared with laughter: “What a foolish deal! I am Lawar the Conqueror, I do not negotiate peace; I am here to conquer your people, or die trying.”
He drew his sword and decapitated the messenger with a single blow. He ordered a slingshot to be brought in position in front of the gates of Taronia and to catapult the messenger's head over the walls.
This was his way to express his contempt for the Taronese peace proposal.

That same evening, the King of the Sons of Lawar was visited by another citizen, a woman this time, carrying the same message: “I too volunteer to give you my life. Kill me to relieve your blood-thirst and let my fellow citizens live.”
The poor lady suffered the same fate as the first messenger, but the moment the woman’s head hit the floor behind the walls, a third messenger was already waiting at the gates to repeat the message once more. He was followed by a fourth, a fifth... Men and women alternated; all were killed.

"This is going smoothly," Lawar XII chuckled when he killed the twentieth Taronese volunteer. "This way, we’re going to conquer Taronia one citizen at a time."
When the fiftieth head was thrown over the walls of Taronia, King Lawar laughed no more.
“This is not how I want to conquer the world,” he complained. “There is no honor in this. I am Lawar the Conqueror, not Lawar the Slaughterer of Sheep.”
He really started to hate the citizens of Taron. He wished them all dead, but he couldn’t increase the pace of the bloodshed. How many Tarons he could kill each day was at the Tarons’ discretion. His army was sitting in front of the gates for several weeks already. Some of the peasants he had forced to put on armor had already deserted their battalion to go home for the harvest.
By the seventieth decapitation, Lawar XII started to wonder about the strategy behind the behavior of the citizens of Taronia. Why were they so willing to offer their head to be chopped off? The more he thought about it, the less he understood them. He only knew one thing: he wanted this absurd theater to stop. Somehow, he had lost his appetite for blood and killing.

When the hundredth citizen, a childless middle-aged woman, stood before him, he finally broke and surrendered unconditionally.
“You have beaten me,” he told the woman. “I subject myself and my army to you.”
“I accept your surrender,” the woman answered, and she signaled the people of Taronia that the siege was over.
Loud cheers emerged from the walls of Taronia. Hundreds of people burst out of the gates, praising the woman who had subdued Lawar the Conqueror. From that moment on, the woman was called Mataronia, and she became the mother of all humans.

"Let us pray for the ninety-nine who died to win this victory," Mataronia said, "and let’s spread our message of peace throughout the world."
And so was done. People from all over the world came on a pilgrimage to Taronia to listen to the teachings of Mataronia.
“Why didn’t the people of Taronia fight when the Sons of Lawar stood at its gates?” one of Mataronia’s disciples asked. “Knowing that Taronia had the weapons and the technology, putting up a fight seemed like the logical course of action.”
“Fighting would have been counter-productive,” Mataronia answered. “People would have been killed on both sides. The death toll would have been much more than the ninety-nine citizens who knowingly and willingly gave their lives. Many other innocent people would have found their death in a fight.”
“How did you know, Lawar XII the Conqueror would surrender after having killed almost one hundred men and woman?” another disciple asked.
“We didn’t,” Mataronia answered in truth. “I for one was ready to die when I repeated our message for the hundredth time.”
“But… what if Lawar XII had kept on killing Taronese citizens until not a single one was left?”
“That was the risk we were willing to take considering the alternative.”
“You could also have surrendered. In that case, you’d all be still alive.”
“Maybe, but it wouldn’t have been much of a life, would it?”