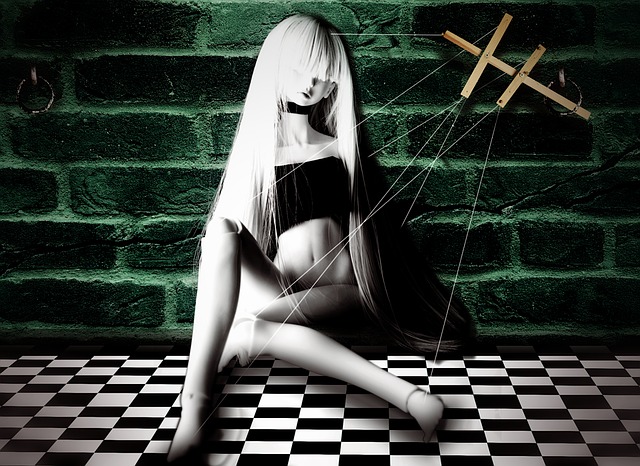 Image by kalhh from Pixabay

This story was written for the Reedsy contest "This Magic Moment".
More specifically in the context of the prompt: "Write about two people in a relationship. One of them has special powers, the other does not."

Death to the Puppet Master

Dina was done being defenseless. She laughed at Charles’ futile attempts to convince her that he cared for her, that he loved her, that he had always loved her.
She didn’t listen to him anymore. The way she saw it, he left her no choice. She had been his puppet and he had been holding the strings. It was time for Dina to cut those strings and set herself free.

Sure, there was romance involved when they first met. He had rescued her from an unenviable position. She was in a dark place and she had been praying for someone like him to come along. No one ever paid attention to her until he discovered her. She had almost given up hope.
“You are beautiful,” he said. “I will make you famous.”
That was music to her ears. He was much older than she was, and he wasn’t exactly her type, but she honestly thought that she loved him. Since she was born, she had felt like a nobody —an inanimate wooden figure in a playhouse without spectators. That changed dramatically when he took her with him and started to work his magic. Charles was her savior.

“Together, we’ll conquer the world: New York, Paris, Amsterdam!” he promised.
Dina couldn’t deny that he had kept his promise. She was an instant success. She made the billboards and filled theater after theater. People paid good money to see her on stage. After being hidden in the shadows for so many years, she was finally going places.
The first months were marvelous. She received five-star reviews in the newspapers. It was “A Star is Born” all over again, only now she was playing the lead role. He would coddle and cosset her. He bought her outfits and jewelry from expensive stores. She bathed in luxury and she enjoyed it. He was always there for her; he was always with her. For the first time in her life, she felt loved, alive, free!

Unfortunately, that sense of freedom was merely an illusion. Charles controlled every move she made, every word she said, every song she sang. When she realized that he had total power over her, it was too late for her to escape. He owned her, and there was nothing she could do about it.
After a while, he would lock her up after every show, pretending that she had become too precious to go out. He claimed it was for her own protection. The world outside was a dangerous place. What they had going was great. They couldn’t risk losing it.
All of that didn’t apply to himself, though. When she looked through the keyhole in hotel rooms in Rome, Madrid, Las Vegas, or wherever it was they were performing, she saw how he put on his best suit and took the money she had earned him.
Now that she had made him a successful man, he could afford leaving her alone every night and staying away until the early hours of the morning. She never succeeded in sleeping until he was back. When he returned, he smelled of alcohol and other women, and she still couldn’t sleep because of his snoring.
Soon, she was at the verge of a nervous breakdown, but the show went on. He made sure of that. No one in the audience noticed her pain. From the moment she appeared on stage, she was under his spell. It was impossible for her to send out a cry for help.

Dina was laying on her bed in the exotic Shangri-La hotel when a Chinese chambermaid came into her room for housekeeping. Charles was out doing some sight-seeing without her. He wanted her to rest.
“I’m so sorry, miss,” the chambermaid said. “I didn’t mean to disturb you.”
When Dina didn’t answer, the chambermaid approached the bed. Dina was paralyzed; she couldn’t say a word. Incidentally, the chambermaid wasn’t a stranger to dark magic. Old Chinese spells and enchantments had been transferred to her by her mother, who in turn had learned everything there was to learn about magic from her mother. The chambermaid descended from a long line of witches. She knew exactly what to do.
“Don’t worry,” she said. “I see what he has been doing to you. I can help you. Let’s fix this.”
She took a small bottle from a hidden pocket in her service trolley. Carefully, she poured some liquid on a piece of cloth.
“Don’t be afraid,” she whispered. “It will feel cold at first; then it will glow a little. It will feel as you have a light fever, but there’s nothing to worry about.”
Gently, she rubbed the cloth on Dina’s forehead.
“This is a magic potion,” she said. “It will take a couple of hours before it starts working, but when it does, you won’t be defenseless anymore.”

“The door was closed from the inside and we’re on the tenth flour,” the hotel detective told inspector Wong. “It highly unlikely that there was a second person in the room.”
Inspector Wong looked at the strange scene in the hotel room. He recognized the puppet player from the billboards. Charles was supposed to perform in the grand ballroom that night, but someone had stabbed a pair of scissors into his chest, not once, but at least a dozen times.
“We checked the security tapes,” the hotel detective continued. “No one was at the door after the victim entered his room. He was all alone.”
Inspector Wong looked at the doll on the king-size bed. He identified the puppet as Dina, the wooden figurine the victim used to bring to life on stage. That strange puppet had made him famous, but now someone had cut her strings and given her a pose that made it look as if she had killed the puppet player.
"This promises to be a strange case," inspector Wong sighs.
“Maybe the puppet was cursed,” the hotel detective said. “We should burn her!”
Inspector Wong laughed. He wasn’t superstitious. He didn’t believe in puppets killing their master.
“I wouldn’t do that,” he told the hotel detective. “For now, she’s still evidence in a murder case.”
Dina sighed in relief. So far no one was suspecting her. She would be free at last.