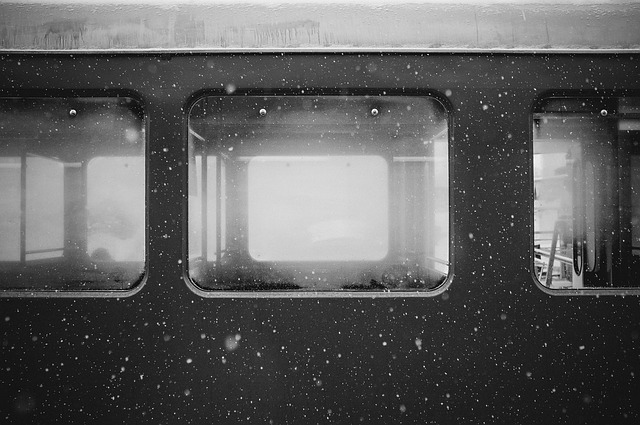 Image by Free-Photos from Pixabay

This story was written for the Reedsy contest "Agatha Christie".
More specifically in the context of the prompt: "Write a short story that takes place on a train."

A train stands still in a field. The weather outside is bad. It’s raining, and clouds are covering the moon. There are three people in the last wagon of the train: Steven, Marc, and a stranger. They don’t know why the train has stopped.

Steven: “This looks like the setting of a horror movie.”
Marc: “What do you mean?”
Steven: “We’re in a train that stopped for an unknown reason in the middle of nowhere. There are only three people in our wagon, us two and that silent stranger three rows behind you. We haven’t seen or heard anyone in the past half hour. Darkness has fallen and the rain is beating against the windows. The only thing missing is a zombie train conductor entering our compartment in search of fresh brains.”
Marc: “Can you make that a vampire train conductor? I don’t care much about zombies. Vampire stories are way more compelling, don’t you agree?”
Steven: “No, I don’t. What is there not to like about a good zombie story?”
Marc: “Zombies symbolize the brainless masses, Steven. Whenever I see people stand in line for hours —or even days— to be among the first lucky ones to get the newest model of an iPhone, I think: look at those fools! What a bunch of zombies!”
Steven: “Hey, watch out what you say! I am one of those lucky iPhone users! I stood in line to get one.”
Marc (winks) “That’s exactly what I mean. I pity people who can't stop gushing about their favorite brands. Life if more than your favorite brand.”
Steven: “You’re just teasing me, aren’t you?”
Marc: “No, I’m not! Let me give you another example. Have you ever been at a political rally?”
Steven: “I can’t say that I was.”
Marc: “Well, I once ended up in one by accident. I was surrounded by a mindless crowd of people, repeating the same cheap and idle slogans over and over again, without giving a second thought about what they were saying. Stuff like ‘All journalists are liars!’ and ‘Science isn’t always right!’ I don’t feel safe when I’m among such people. It’s as if they are after the brains of every person who shows an inkling of common sense.”
Steven: “That’s hardly a reason to dislike zombies. Zombies are more thought-provoking than the lot of fanatics you describe. Take a movie such as ‘Train to Busan’ for instance; wouldn’t you say that movie is an excellent critique on everything that goes wrong at the top, be it in the government or in business? Young and old people alike get trampled by the system. No wonder we’re all changing into despondent zombies.”
Marc: “I don’t think I’ve seen that movie.”
Steven: “It’s a Korean movie from a couple of years ago. It was quite popular. I’m surprised you don’t know it.”
Marc: “The only good zombie movie I’ve ever seen, is George Romero’s original ‘Dawn of the Dead’ from the seventies. That was a prophetic indictment of the type of consumerism I just mentioned. I liked the movie, but I still don’t like zombies. Vampires are my thing.”
Steven: “Come on, Marc, you can’t seriously mean that! Count Dracula is nothing more than a ruthless tyrant and butcher. In films like ‘The Addiction’, vampires are used as a metaphor for people addicted to sex and drugs. When ‘Interview with the Vampire’ was released, the obsession for blood was interpreted as a reference to AIDS.”
Marc: “But Steven, doesn’t that confirm what I’m trying to explain? Vampire stories are intriguing. The role of Louis, played by Brad Pitt, shows how nuanced vampires are. They aren’t all bad. There’s much more to vampires than meets the eyes. When I first saw ‘Interview with the Vampire’, I almost wept when Brad Pitt witnessed his first sunrise in centuries watching a movie in a movie theater. It’s one of my favorite movie scenes of all times. So meta…”
Steven: “I must admit: ‘Interview with the Vampire’ is one of the few films that are better than the book. Have you tried reading Anne Rice books? They are so boring!”
Marc: “Tsssk… That’s a cheap argument. Name me one good book about zombies!”
Steven: “What did you think of ’Pride and Prejudice and Zombies’?”
Marc: “A Jane Austin parody? Is that all you have?”
Steven: “You claim that zombies are brainless, but vampires aren’t much better. Just like capitalists can only think about money, vampires too can only think of one thing: blood. They are the capitalists of horror fantasy.”
Marc: “That’s so not true! Vampires have style and class. One of my favorite movies is ‘Only Lovers Left Alive’. Zombie movies are about death and destruction. ‘Only Lovers Left Alive’ shows what is essential in live: love, art, beauty. In that movie, some of the greatest artists of all times are revealed as being vampires living among normal people in perfect harmony.”
Steven: “Don’t exaggerate, Marc, it’s fiction. In fiction, I prefer zombies over bloodsuckers any time.”
Marc: “That’s because you have poor taste. In reality, vampires are more fascinating than zombies.”
Steven: “But we’re not talking about reality, are we?”

While Mark and Steven are discussing zombies and vampires, the third passenger leaves his seat. None of the boys have noticed that he has been following their conversation with a contemptuous grimace on his face. Suddenly, the stranger stands next to them.
Stranger: “Look outside, boys. It has stopped raining. The full moon is shining through the clouds.”
The sound of the stranger’s voice gives Mark and Steven goosebumps. Startled by this unexpected intrusion, they can’t help but look outside. The stranger is right. The rain has stopped. A creepy full moon becomes visible as the clouds scatter. Suddenly, the boys hold their breath.
Steven (in terror): “What is happening?”
Marc (whispering): “I think we’re in trouble.”
The boys are too afraid to look behind them. In the reflection of the window, they see how the stranger slowly transforms into a werewolf.