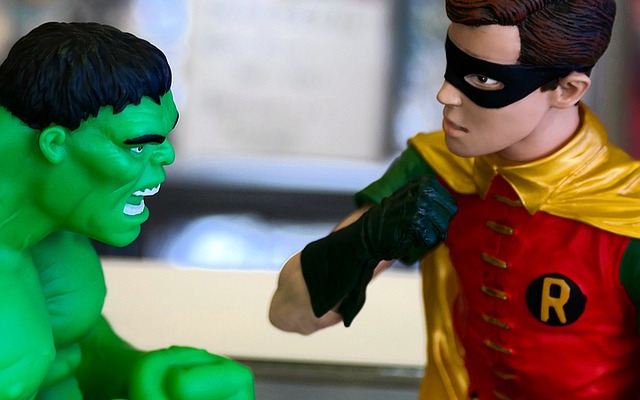 Image by Ruben Porras from Pixabay

This story was written for the April edition of the monthly Furious Fiction contest.

This was the assignment:

Truth to be told, I didn't have inspiration for this one and that shows.

Five stranded victims of the Trademark war are sitting on the side of the road, waiting for their savior to show up.
“Lemon sad,” The Incredible Lemon says.
Captain Apron tries to cheer him up: “Don’t be! As soon as we’re home, I’ll make you cupcakes —as many as you can eat!”
The Incredible Lemon answers with a sour look and a grunt.
“First we have to get home,” Icon Man sighs. He points at the low battery icon on his chest: “If only I had some more juice left.”
“Our friend has been gone for over an hour,” Ribbon says. “He should have been back by now.”
Boy Ponder has barely finished his sentence when they hear the roar of an engine. A black van with an orange stripe appears around the corner. It comes to a halt with squeaky tires, splashing the four and a half men with a gush of water spurting out of nowhere.
Black Pigment shouts at the man at the wheel: “Splash Gordon! This will go into the Goofs section of this episode on IMDB. There wasn’t even a drop of rain in the gutter. You made us wet only for the sake of the effect.”
“I thought you’d be happy to see me,” Splash laughs, observing Black Pigment’s suit from top to toe. “By the way: you’ve got a security breach at Los Pantalones.”
“I don’t even know what that means,” the king and protector of Wokondo grumbles.
“It means your fly is down,” Icon Man explains, using his most ironic voice.
Peeved, Black Pigment fixes the problem while cursing the cheap costume design.
Ribbon marvels at the vehicle: “Where did you find that cool van, Splash?”
“I stole it from a bunch of guys who called themselves ‘The A-squad’, although ‘B-team’ would have been a more accurate name. They were dressed as if they hadn’t changed their wardrobe since the eighties and they missed me by a foot every time they tried hitting me.”
Icon Man interrupts his talkative colleague: “Great work, Splash. I love it when a plan comes together!”
“I think that line is copyrighted,” Captain Apron warns.
“I’ll claim it's fair use if someone complains about it,” Icon Man replies.
Captain Apron protests: “That doesn’t always work! That’s what got us banned from the broadband in the first place, remember? We went from hero to hobo.”
“We’ve become a parody of everything we ever wanted to be,” Black Pigment groans.
“Maybe we should take this as an opportunity,” Ribbon suggests.
“What do you mean?” Captain Apron asks.
“We could change our names and apply to another streaming service.”
Black Pigment nods at the boy: “I second that, but let’s choose better names this time!”
“Better names alone won’t do it,” Icon Man says.
“What else do we need?” Captain Apron asks.
Icon Man's eyes pierce at me through the fourth wall: “We should start by hiring a better screenwriter.”