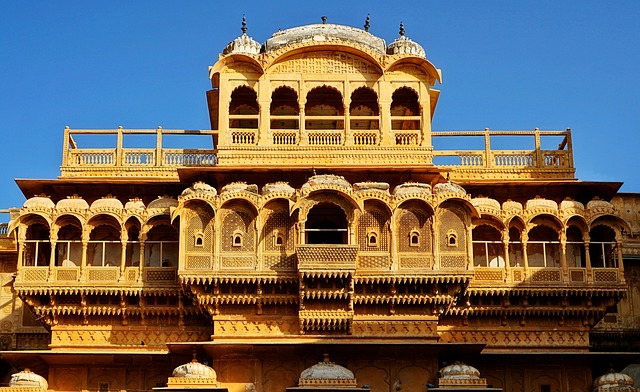 Image by Volker Glätsch from Pixabay

This story was written for the Reedsy contest "Haruki Murakami".
More specifically in the context of the prompt: "Write a story in which someone finds a secret passageway."

“Unfortunately, my dear Scheherazade, the time has come for you to die.”
The mighty sultan beckoned the executioner who carefully checked the sharpness of his scimitar.
“So be it, o honorable sultan,” Scheherazade replied, “but grant me an answer to one last question.”
The sultan showed the palm of his hand to the executioner and nodded to his temporary concubine. Scheherazade’s question surprised him: “Do you know the story of the Golden Kingdom?”
“I can’t say that I do,,” he answered. “Would you care to tell me that story before you go?’

There once was a king who ruled over the wealthiest kingdom of the world. He lived in a golden palace the size of a small city. That was also where he died, having reached the venerable age of one hundred and twenty-one years.
Alas, although many men called him daddy, the wealthy monarch didn’t leave any heir to the throne. During his life, he had always exhibited a preference for a specific type of fruit, choosing peaches over cherries. He had sowed generously and abundantly, but his seed was wasted in barren cracks and pie holes. To put it more bluntly: he had never shown any interest in impregnating a woman. Only men had seen the most private parts of the palace.
The day after his funeral, his servants left the royal dwelling and closed its golden gate behind them. The premise was completely locked and abandoned. It would remain that way until a new king succeeded in opening the path to power, and by doing so, claiming the throne as his.
From far and wide, hundreds of noblemen came to the Golden Kingdom in the hope of entering the palace. Some brought sophisticated keys to unlock the golden gate; some invited wizards to cast a spell that would allow them to access the inaccessible; others arrived with a battering ram to force their way into the palace with brutal violence. All these efforts were to no avail. The massive door didn’t budge.
Ibrahim, the cunning slave of the Rose Prince of the Rear Country, watched the spectacle while he was cruising around in the outskirts of the kingdom’s capital. The futile attempts of the contenders of his prince were interesting, but not as interesting as what he learned by fraternizing with the servants and slaves of the late monarch. As soon as they found out they had friend —named Dorothy— in common with Ibrahim, they confided him with every secret regarding the manners and customs of the heirless king. With this knowledge, the clever slave returned to the tent of his master.
“My dear prince,” he whispered while he tucked the prince in for the night. “I have studied the life and the ways of his majesty, the late king of the golden kingdom. I don’t think we should focus on the golden gate in front. I’ve come to believe that there’s a back entrance somewhere, a secret passageway on the other side of the palace.”
The prince was all ears: “A back door? That makes sense! Good friends often take the back door. Do you know where to find it?”
“I talked to the late King’s lackey,” said the devoted slave. “He told me that it's hidden well, but there’s an easy way to recognize it.”
The rose prince encouraged sweet Ibrahim to continue: “Go on, humble slave, this might be the only opportunity I have left to make my father proud of me.”
“The rear entrance can be recognized by the form of its keyhole,” whispered the loyal slave.
“Its keyhole?” the prince asked. “How so?”
“I've been told it looks like a little pink star,” Ibrahim answered.
“We have no time to waste,” the prince decided. He jumped out of his bed and into his clothes. “Let’s go for a walk around the palace and let’s find that secret passageway.”
“But it’s dark outside,” Ibrahim said.
“Fortunately, we have some experience finding our way in the dark,” the rose prince laughed. And off they went.
The searched all night, but finally —the sun hadn’t risen yet, but dawn was upon them— they found the hidden entrance.
“What a nice little keyhole,” said the prince when they discovered the pink star on the door.
“If only we had a key that fits,” said Ibrahim.
"Are you thinking what I’m thinking?” asked the rose prince.
“If you’re thinking about morning wood, then I think I do,” answered his humble slave.
Less than an hour later, the capital of the golden kingdom awoke with the rose prince as the new king. Disgruntled, the contenders to the throne returned to their own countries and princesses. The servants and slaves of the old king moved back into the palace to prepare for a feast that would last for over a month. The subjects of the golden kingdom were happy to see that continuity was guaranteed. Now that his youngest boy had managed to seize his own kingdom, the father of the rose prince reconsidered his decision to disinherit his son. Everybody was happy.
The day after the festivities ended, the rose prince decided it was time to reward the person who had single-handedly achieved what no one had held possible.
“Ibrahim,” said the prince that morning, seated on his ivory throne, pondering over a number two. “Look at my beautiful palace. Its walls are covered in gold and set with precious stones. The fountain on the royal square sprays sparkling wine day and night. I am richer than the richest person in the world. For all of this, I have only you to thank. I want to make you my Grand Vizier.”
Ibrahim took this role with great responsibility. With his help, the rose prince ruled over the golden kingdom with kindness and wisdom for many years until they both died of old age.

“What an amazing story, my dear Scheherazade,” said the sultan. “I would give anything to see if only a glimpse of that golden kingdom.”
“Give me another day to live, o noble Sultan,” said Scheherazade, “and I’ll make that happen."
“Agreed!” said the sultan.
Scheherazade turned over on her belly. The full moon illuminated the room and her bare back. The sultan couldn't take his eyes off that beautiful sight. Scheherazade curled her back; a perfect pair of buttocks reflected the moonlight.
“Do you see the little pink star in the twilight zone?” Scheherazade asked. “I think you have a key that fits just in it.”
That’s how Scheherazade survived to live yet another day.